Hypoth. 1. Bodies move uniformly in straight lines unless so far as they are retarded by the resistence of ye Medium or disturbed by some other force.

Hyp. 2. The alteration of motion is ever proportional to ye force by wch it is altered.

Hyp. 3. Two Motions imprest in \two/ different lines, if those lines be taken in proportion to the motions & completed into a parallelogram, compose a motion whereby the diagonal of ye Parallelogram shall be described in the same time in wch ye sides thereof would have been described by those compounding motions apart. The

If a body move in vacuo & be continually attracted toward an immoveable center, it shall constantly move in one & the same plane, & in that plane describe equal areas in equall times.

Let A be ye center towards wch ye body

is attracted, & suppose ye attraction acts not continually but by discontinued impressions made at equal intervalls of time wch intervalls we will consider as physical moments. Let BC be ye right line in wch it begins to move from B & {illeg} wch it describes wth uniform motion in the first physical moment before ye attraction make its first impression upon it. At C let it be attracted towards ye center A wth|by| one impuls or impression of force, & let CD be ye line in wch it shall move after that impuls. Produce BC to I so that CI be equall to BC & draw ID parallel to CA & the point D in wch it cuts CD shall be ye place of ye body at the end of ye second moment. And because the bases BC CI of the triangles ABC, ACI are equal those two triangles shall be equal. Also because the triangles ACI, ACD stand upon the same base AC & between two parallels they shall be equall. And therefore the triangles ACD described in the second moment shall be equal to ye triangle ABD described in the first moment. And by the same reason if the body at ye end of the 2d, 3d, 4th, 5t & following moments be attracted by single impulses in <1r> D, E, F, G &c describing the line DE in ye 3d moment, EF in the 4th, FG in ye 5t &c: the triangle AED shall be equall to the triangle ADC & all the following triangles AFE, AGF & to the preceding ones & to one another. And by consequence the areas compounded of these equall triangles (as ABE, AEG, ABG &c) are to one another as the {l}ines times in wch they are described. Suppose now that the moments of time be diminished in length & encreased in number in infinitum, so yt the impulses or impressions of ye attraction may become continuall & that ye line BCDEFG by ye infinite number & infinite littleness of its sides BC, CD, DE &c may become a curve one: & the body by the continual attraction shall describe areas of this Curve ABE, AEG, ABG & proportionall to the times in wch they are described. W. W. to be Dem.

Let AECD be the Ellipsis, A, C its two

ends or vertices, F that focus towards wch the body is attracted, & AFE, CFD areas wch the body with a ray drawn from that focus to its center, describes at both ends in equal times: & those areas by the foregoing Proposition must be equal because proportionall to the times: that is the rectangles & must be equal supposing the arches AE & CD to be so very short that they may be taken for right lines & therefore AE is to CD as FC to FA. Suppose now that AM & CN are tangents to the Ellipsis at its two ends A & C & that EM & DN are perpendiculars let fall from the points E & D upon those tangents: & because the Ellipsis is alike crooked at both ends those perpendiculars EM & DN will be to one another as the squares of the arches AE & CD, & therefore EM is to DN as FCq to FAq. Now in the times that the body by means of the attraction moves in the arches AE <2r> & CD from A to E & from C to D it would without attraction move in the tangents from A to M & from C to N. Tis by ye force of the attractions that the bodies are drawn out of the tangents from M to E & from N to D & therefore the attractions are as those distances ME & ND, \that is the attraction/ at the end of the Ellipsis A is to the attraction at ye other end of ye Ellipsis C as ME to ND & by consequence as FCq to FAq. W. w. to be dem.

Let APBQ be the Ellipsis; AB its

long axis; C its center; F, f its Foci; P the point of contact; PR the tangent; CD the line parallel to the tangent, & PD the segment of the line FP. I say that this segment shall be equal to AC.

Let APBQ be ye Ellipsis, AB its long Axis, F, f its foci, C its center, PQ ye line drawn through its focus F, & VCS its diameter parallel to PQ & PQ will be to VS as VS to AB.

For draw FP \fp/ parallel to QFP & cutting the Ellipsis in p. Joyn Pp cutting VS in T & draw PR wch shall touch the <2v> Ellipsis in P & cut the diameter VS produced in R & CT will be to CS as CS to CR, as has been shewed by all those who treat of ye Conic sections. But CT is ye semisumm of FP & fp that is of FP & FQ & therefore 2CT is equal to PQ. Also 2CS is equal to VS & (by ye foregoing Lemma) 2CR is equal to AB. Wherefore PQ is to VS as VS to AB. W. W. to be Dem.

Let AKBL be the Ellipsis, AB 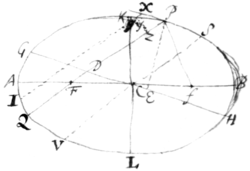 its long Axis, KL its short Axis, C its center, F, f its foci, P ye point of the perimeter, PF ye first line PQ that line produced to the other side of the Ellipsis PX the tangent, XY ye subtense produced to ye other side of the Ellipsis & YZ the distance between this subtense & the first line. I say that the rectangle YXI is to the rectangle as YZq to KLq

For let VS be the diameter of the Ellipsis parallel to the first line PF & GH another diametrer parallel to ye tangent PX, & the rectangle YXI will be to the square of the tangent PXq as the rectangle SCV to ye rectangle GCH that is as SVq to GHq. This a property of the Ellipsis demonstrated by all that write of the conic sections. And they have also demonstrated that all the Parallelogramms circumscribed about an Ellipsis are equall. Whence the rectangle is equal to ye rectangle & consequently GH is to KL as AB that is (by Lem. 1) 2PD to 2PE & in the same proportion is PX to YZ. Whence GH PX is to GH as YZ to KL & PXq to GHq as YZq to KLq. But PXq was to GHq as <3r> YXI was to PXq as SVq {illeg} that is (by Lem Cor. Lem. 2) to GHq, whence invertedly YXI is to as PXq to GHq & by consequence as YZq to KLq. W. w. to be Dem.

If a body be attracted towards either focus of any Ellipsis & by that attraction be made to revolve in the Perimeter of ye Ellipsis: the attraction shall be reciprocally as the square of the distance of the body from that focus of the Ellipsis.

Let P be the place of the body at {any} in the Ellipsis at any moment of time & PX the tangent in wch the body would move uniformly were it not attracted & X ye place in that tangent at wch it would arrive in any given part of time & Y the place in the perimeter of the Ellipsis at wch the body doth arrive in the same time by means of the attraction. Let us suppose the time to be divided into equal parts & that those parts are very little ones so yt they may be considered as physical moments & yt ye attraction acts not continually but by intervalls only once in the beginning of every physical moment & let ye first action be upon ye body in P, the next upon it in Y & so on perpetually, so yt ye body may move from P to Y in the chord of ye arch PY & from Y to its next place in ye Ellipsis in the chord of ye next arch & so on for ever. And because the attraction in P is made towards F & diverts the body from ye tangent PX into ye chord PY so that in the end of the first physical moment it be not found in the place X where it would have been without ye attraction but in Y being by ye force of ye attraction in P translated from X to Y: the line XY generated by the force of ye attraction in P must be proportional to that force & parallel to its direction that is parallel to PF Produce XY & PF till they cut the Ellipsis

in I & Q. Ioyn FY & upon FP let fall the perperpendicular {sic} YZ & let AB be the long Axis & KL ye short Axis of ye Ellipses. And by the third Lemma YXI will be to as YZq to KLq & by consequence YX will be equall to .

And in like manner if py be the chord of another Arch py wch the revolving body describes in a physical moment of time & px be the tangent of the Ellipsis at p & xy the subtense of <3v> the angle of contact drawn parallel to pF, & if pF & xy produced cut ye Ellipsis in q & i & from y upon pF be let fall the perpendicular yz: the subtense yx shall be equal to . And therefore YX shall be to yx as to , that is as to

And because the lines PY py are by the revolving body described in equal times, the areas of the triangles PYF pyF must be equal by the first Proposition; & therefore the rectangles & are equal, & by consequence YZ is to yz as pF to PF. Whence is to as {illeg} to And therefore YX is to yx as to .