Some Experiments propos'd in relation to Mr. Newtons Theory of light, printed in Numb. 80; together with the Observations made thereupon by the Author of that Theory; communicated in a Letter of his from Cambridge, April 13. 1672.

I. TO contract beams of the Sun without the hole of the window, and to place the prism between the focus of the Lens and the hole, spoken of in M. Newtons theory of light,

II. To cover over both Ends of the Prism with paper at several distances from the middle; or with moveable rings, to see, how that will vary or divide the length of the figure, insisted upon in the said Theory.

III. To move the Prism so, as the End may turn about the middle being steady.

IV. To move the prism by shoving it, till first the one side, than the midle, than the other side pass over the hole, observing the same Parallelism. 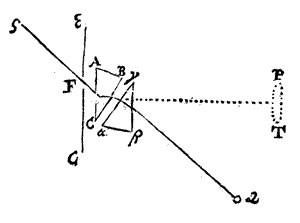