Trin Coll |Cambridge,| Apr 16|3| 1672. /A letter of Mr Newtons, referring to the next \next/ precedent, and giving wthall an account of some Experimts, proposed to Mr Newton, for the clearing of his \new/ doctrine of Light.\

I herewith send you an answer to the Iesuite Pardies considerations,[1] in the conclusion of wch you may possibly apprehend me a little too positive, but I speake onely for my selfe. I am highly sensible of yor good will in communicating to me such observations as occur concerning my Theories or Catadioptricall instruments, & I desire you to continue that favour to me. I shall immediately proceed to add what I promised to my answer to Mr Hooks Observations, & then send it you. Monsr Hugenius has very observed the confusion of refractions neare the edges of a Lens where its two superficies are inclined, much after the same manner as like the planes of {illeg} Prism whose refractions are in like manner confused. But it is not from ye inclination of those superficies so much as from ye htereogeneity of light that that confusion is caused. For by illuminating an object wth homogeneall light, I have seen it far distincter through a Prism then I could by light that was heterogeneall.

I suppose the designe of Sr Rt Morays Experiments is to have their events expressed, wth such observations as may occur concerning them.

1. Touching the first I have observed that the solar image falling on a paper placed at ye focus of the Lens, was by the interposed Prism drawn out in length proportionall to the Prisms refraction or distance from that focus. And ye cheife observable here wch I remember was that the streight edges of the oblong image were distincter then they would have been without the lens.

Considering that the rays comeing from the Planet Venus are much lesse inclined one to another then those wch come from the opposite parts of the suns disq{illeg}|u|e, I once tryed an experiment or two wth her light. And to make it sufficiently strong I found it necessary to collect it first by a broade lens, & then interposing a Prism between the Lens & its focus at such distance that all the light might passe through the Prism, I found the focus wch before appeared like a lucid point, to be drawn out into a long splendid line by the Prisms refraction.

I have sometimes designed to try how a fixt starr seen through a long Telescope would appeare by interposing a Prism between the Telescope & my eye. But by the appearance of Venus viewed wth my naked eye through a Prism I presage the event.

2. Concerning ye second Experiment I have occasionally observed that by covering both ends of the Prism wth paper at severall distances from the middle, the breadth of the solar image will be incread|s|ed or diminished as much as is the aperture of the Prism wthout any variation of the length. Or if so much & no more augmented.

3. Of the third experiment I have occasion to speake in my answer to Mr Hook, where you will find the effects of two Prisms in all crosse positions of one to another described. But if one Prism alone be turned about, <8v> the coloured image will onely be translated from place to places, describing a circle or some other conick section on the wall on wch it is projected, wthout suffering any alteration in its shape, unlesse such as may arrise from the obliquity of the wall, or casuall change of the Prisms obliquity to ye sun's rays.

4. The effect of the fourth Experiment I have already insinuated telling you (in pag 3076 of the said Transactions) that light passing through the parts of the Prism of divers thickcnesses did still exhibit the same Phænomena.

I|T|{illeg}{m} The long axes of the two Prisms in the experiment described in the said pag 3076 of the Transactions were parallel one to another. And for the rest of their position you will best apprehend it by this scheme, where let EG designe the window, F the hole in it through wch the light arrives at the Prisms, ABC the first Prism wch refracts the light towards PT, painting there the colours in an 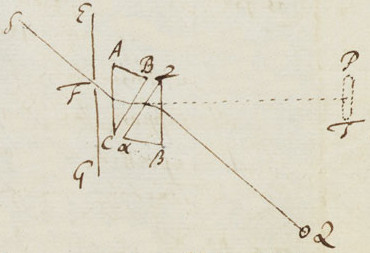 oblong forme, & αβγ the second Prism wch refracts back againe the rays to Q, where the long image PT is contracted into a round one. The plane αγ to BC, & βγ to AC I suppose parallell, that the rays may be equally refracted contrary ways in both Prisms,|.| And the Prisms must be placed very neare to one another. For if their de|i|stance be so great that colours begin to appeare in the light before its incidence on the second Prism, those colours will not be destroyed by the contrary refractions of that Prism.

These things being observed the round image Q will appeare of the same be|i|gnesse wch it doth when both the Prisms are taken away that the light may passe directly towards Q from ye hole wthout any refraction at all. And its diameter will equall {illeg} the diameter \breadth/ of the long image PT if those images be equally distant from the Prisms.

If an accurate consideration of these refractions be designed, it is convenient that a Lens be placed in the hole F, or immediately after the Prisms, so that its focus be at the image Q or PT. For thereby the perimeter of the image Q & the streight sides of the image PT will become much better defined then otherwise.

Thus far concerning Sr Rt Morays proposalls. I have nothing more at present unlesse to desire you that in the letter wherein I sent you the Table of Apertures & Charges you would change an expressiō concerning the six foot Tube where I intimated that it was none of the best in its kind. For least the freind of whome it was borrowed should think I depreciate it, I had rather that ye expression should be a little extenuated somthing after this manner, that I am not very well assure <9r> of its goodnesse & therefore desire that the other experiment of reading at 100 foot distances should rather be confided in. You will do me a favour to peruse the rest of that letter also before you commit it to ye presse. For I writ it in so much hast that I had no time to review it. And by rendering any expressions more perspicuous or lesse ambiguous you will still oblige

I thank you for ye kind proffer of these last Transactions. b|B|ut my Carrier was immediately gone towards London before the receipt of yor letter.

To the honoured Henry Oldend|b|urg Es at his house about the middle of the Old Pall-mail in Westminster.