An Accompt of a New Catadioptrical Telescope invented by Mr. Newton, Fellow of the R. Society, and Professor of the Mathematiques in the University of Cambridge.

THis Excellent Mathematician having given us, in the Transactions of February last, an account of the cause, which induced him to think upon Reflecting Telescopes, instead of Refracting ones, hath thereupon presented the Curious World with an Essay of what may be performed by such Telescopes; by which it is found, that Telescopical Tubes may be considerably shortned without prejudice to their magnifying effect.

This new instrument is composed of two Metallin Speculum's, the one Concave, (instead of an Object-glass) the other Plain; and also of a small plano-convex Eye-Glass.

By Figure I. of Tab. I. the structure of it may be easily imagined; viz. That the Tube of this Telescope is open at the end which respects the object; that the other end is close, where the said Concave is laid, and that near the open end there is a flat oval speculum, made as small as may be, the less to obstruct the entrance of the rays of Light, and inclined towards the upper part of the Tube, where is a little hole furnish't with the said Eye-glass. So that the rays coming from the object, do first fall on the Concave placed at the bottome of the Tube; and are thence reflected toward the other end of it, where they meet with the flat speculum, obliquity posited, by the reflection of which they are directed to the little plano-convex Glass, and so to the spectators Eye, who looking downwards sees the Object, which the Telescope is turned to.

To understand this more distinctly and fully, the Reader may please to look upon the said Figure, in which

A B is the Concave speculum, of which the radius or semidiameter is 12 or 13 inches.

C D another metalline speculum, whose surface is flat, and the circumference oval.

G D an Iron wire, holding a ring of brass, in which the speculum C D is fixed.

F, a small Eye-glass flat above, and convex below, of the twelfth part of an inch radius, if not less; forasmuch as the metal collects the Sun's rays at 6 inches distance, and the Eye-glass at less than of an inch distance from its vertex: Besides that the Author (as he informs us) knew their dimensions by the tools to which they were ground, and particularly measuring the diameter of the hemi-spherical Concave, in which the Eye-glass was wrought, found it the sixth part of an inch.

G G G, the fore part of the Tube fastn'd to a brass-ring H I, to keep it immoveable.

P Q K L, the hind-part of the Tube, fastn'd to another brass-ring P Q.

O, an Iron hook fastn'd to the Ring P Q, and furnish't with a screw N, thereby to advance or draw back the hind-part of the Tube, and so by that means to put the specula in their due distance.

M Q G I a crooked Iron sustaining the Tube, and fastned by the nail R to the Ball and Socket S, whereby the Tube may be turned every way.

The Center of the flat speculum C D, must be placed in the same point as the Tube's Axe, where falls the perpendicular to this Axe, drawn to the same from the center of the little Eye-glass: which point is here marked at T.

And to give the Reader some satisfaction to understand, in what degree it represents things distinct, and free from colours, and to know the aperture by which it admits light; he may compare the distances of the focus E from the vertex's of the little Eye-glass and the Concave speculum, that is, E F, of an inch, and E T V, 6 inches; and the ratio will be found as 1 to 38; whereby it appears, that the Objects will be magnified about 38 times. To which proportion is very consentaneous, an Observation of the Crown on the weather-cock, about 300 feet distant. For the scheme X fig. 2. represents it bigger by 2 times in diameter, when seen <4006> through this, than through an ordinary Telescope of about 2 foot long. And so supposing this ordinary one to magnifie 13 or 14 times, as by the description it should, this new one by the Experiment must magnifie near as much as hath been assigned.

Thus far as to the structure of this Telescope. Concerning the Metalline matter, fit for these reflecting Speculums, the Inventor hath also considered the same, as may be seen by two of his Letters, written to the Publisher from Cambridge Jan. 18. and 29. 16. to this effect, viz.

1. That for a fit metalline substance, he would give this Caution, that whilest men seek for a white, hard and durable metallin composition, they resolve not upon such an one, as is full of small pores, only discoverable by a Microscope. For though such an one may to appearance take a good polish, yet the edges of those small pores will wear away faster in the polishing than other parts of the metal; and so, however the Metal seem polite, yet it shall not reflect with such an accurate regularity as it ought to do. Thus Tin-glass mixt with ordinary Bell-metall makes it more white and apt to reflect a greater quantity of light; but withall its fumes, raised in the fusion, like so many aerial bubles, fill the metall full of those Microscopical pores. But white Arsenick both blanches the Metall and leaves it solid without any such pores, especially if the fusion hath not been too violent. What the Stellate Regulus of Mars (which I have sometimes used) or other such like substance will do, deserves particular examination.

To this he adds this further intimation, that Putty or other such like powder, with which 'tis polished, by the sharp angles of its particles fretteth the metall, if it be not very fine, and fills it full of such small holes, as he speaketh of. Wherefore care must be taken of that, before judgment be given, whether the metall be throughout the body of it porous or not.

2. He not having tried, as he saith, many proportions of the Arsenick and Metall, does not affirm, which is absolutely best, but thinks, there may conveniently be used <4007> any quantity of Arsenick equalling in weight between a sixt and eight part of the Copper, a greater proportion making the Metal brittle.

The way, which he used, was this. He first melted the Copper alone, then put in the Arsenick, which being melted, he stirred them a little together, bewaring in the mean time, not to draw in breath near the pernicious fumes. After this, he put in Tin, and again so soon as that was melted (which was very suddenly) he stirred them well together, and immediately powred them off.

He saith, he knows not, whether by letting them stand longer on the fire after the Tin was melted, a higher degree of fusion would have made the metall porous; but he thought that way he proceeded to be safest.

He adds, that in that metall, which he sent to London, there was no Arsenick, but a small proportion of Silver; as he remembers, one shilling in three ounces of metall. But he thought withall, that the Silver did as much harm in making the metall soft, and so less fit to be polish't, as good in rendring it white and luminous.

At another time he mixed Arsenick one ounce, Copper six ounces, and Tin two ounces: And this an Acquaintance of his hath, as he intimates, polish't better, than he did the other.

As to the objection, that with this kind of Perspectives, objects are difficultly found, he answers in another letter of his to the Publisher, of Jan. 6. 16. that that is the inconvenience of all Tubes that magnifie much; and that after a little use the inconvenience will grow less, seeing that himself could readily enough find any day-Objects, by knowing which way they were posited from the other objects that he accidentally saw in it; but in the night to find Stars, heacknowledges {sic} it to be more troublesome; which yet may, in his opinion, be easily remedied by two sights affixed to the Iron rod, by which the Tube is susteined; or by an ordinary perspective glass fastn'd to the same frame with the Tube, and directed towards the same object, as Des-Cartes in his Dioptricks hath described for remedying the same inconvenience of his best Telescopes. 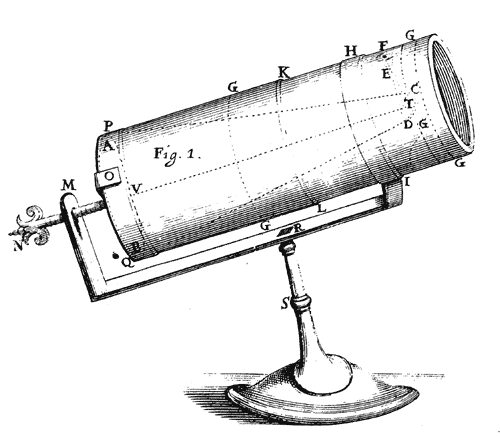